Eighth & Penn consists of the restoration of two existing historic buildings at 711 and 713 Penn Avenue. The McNally Building (711 Penn Ave) and the Bonn Building (713 Penn Ave) have been fixtures of downtown Pittsburgh since the 1890's and are turn-of-the-century, masonry buildings, rich with historic character.

The facades and storefronts of these buildings have been restored, with the interiors renovated to provide space for rental apartment units & other amenities. The addition forms a continuation of the Penn Avenue streetscape, fusing the existing parking lot at the corner of 8th & Penn with new construction that is modern, but sympathetic to the historic buildings.
Learn More 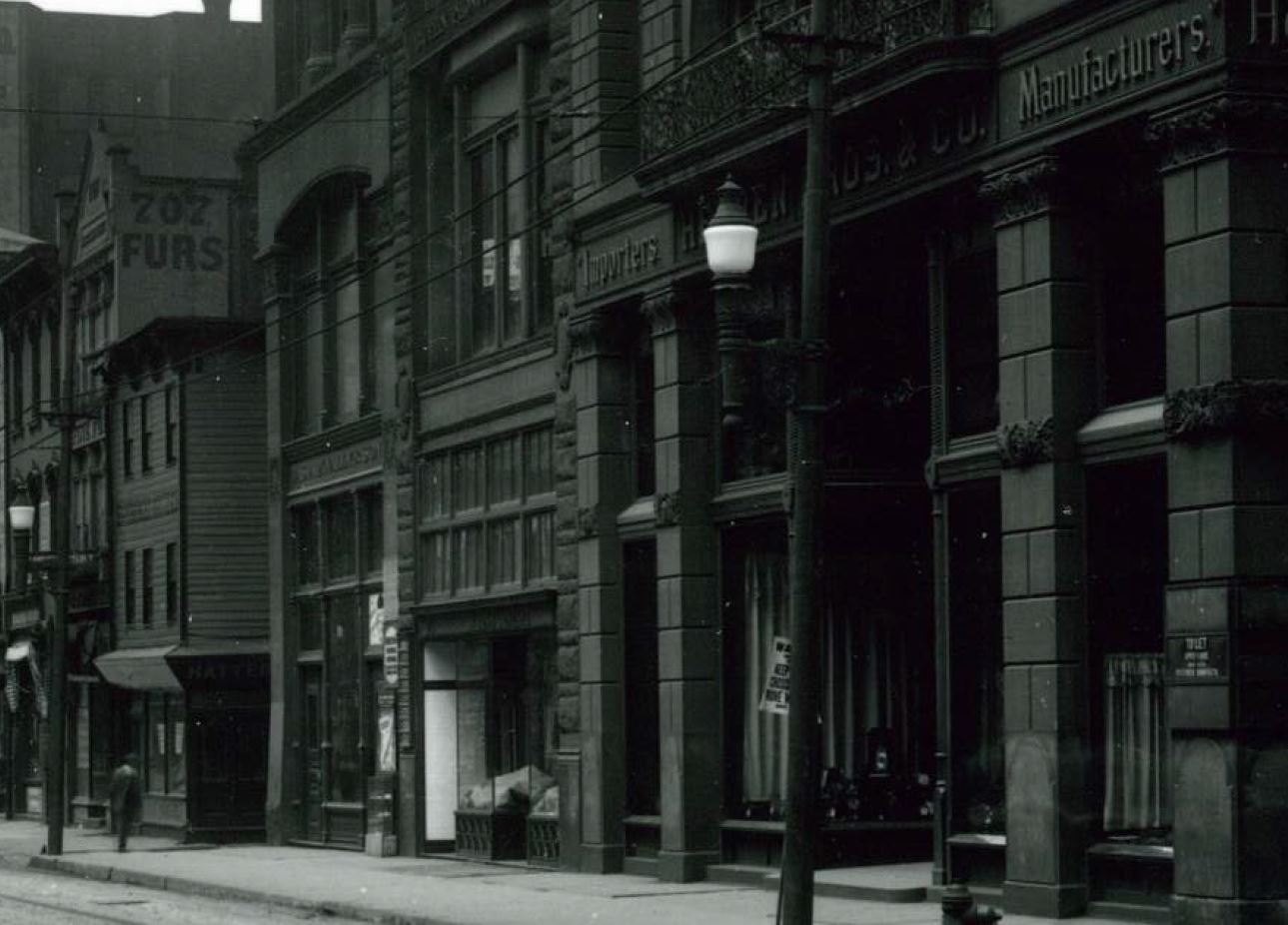 The addition on Penn Ave is split into two components, imitating the property line divisions existing within the streetscape. The first component is a glass & steel facade, whose A-B A rhythm forms a modern & tectonic interpretation of the adjacent Bonn Building. 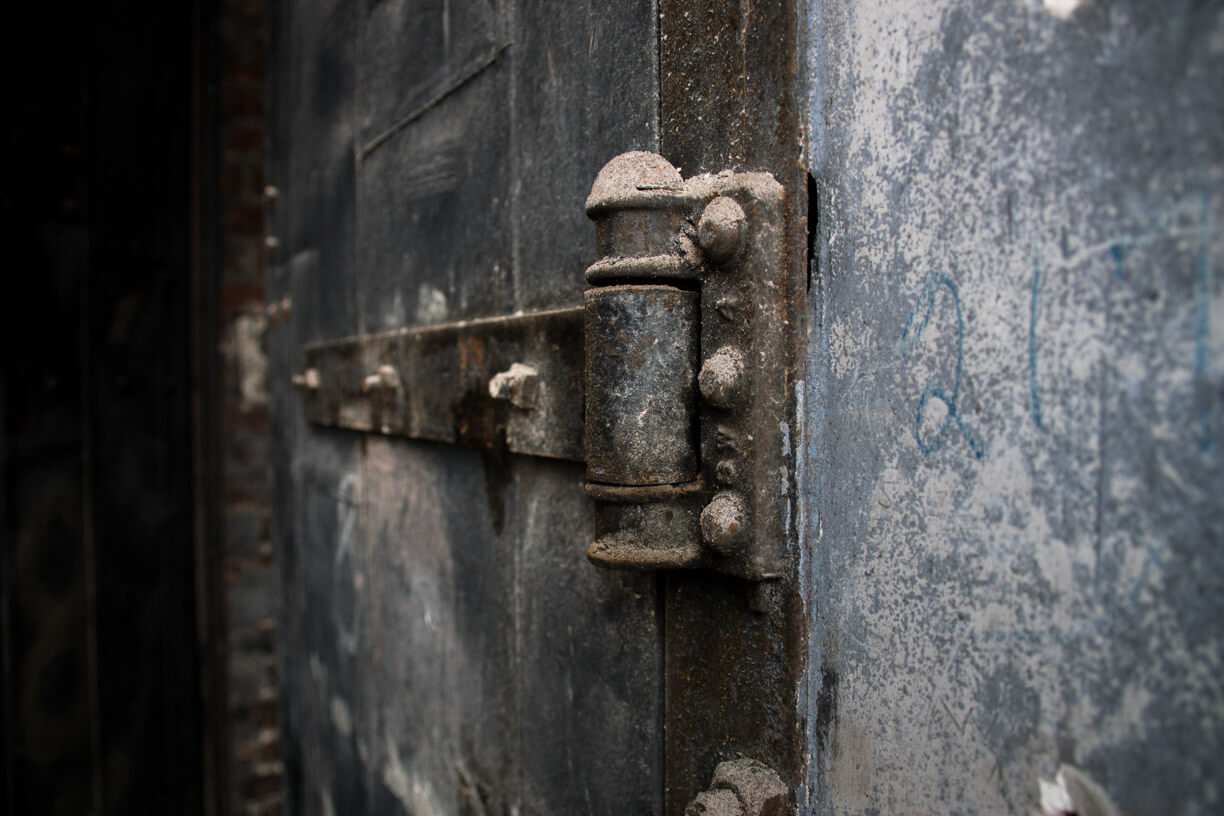 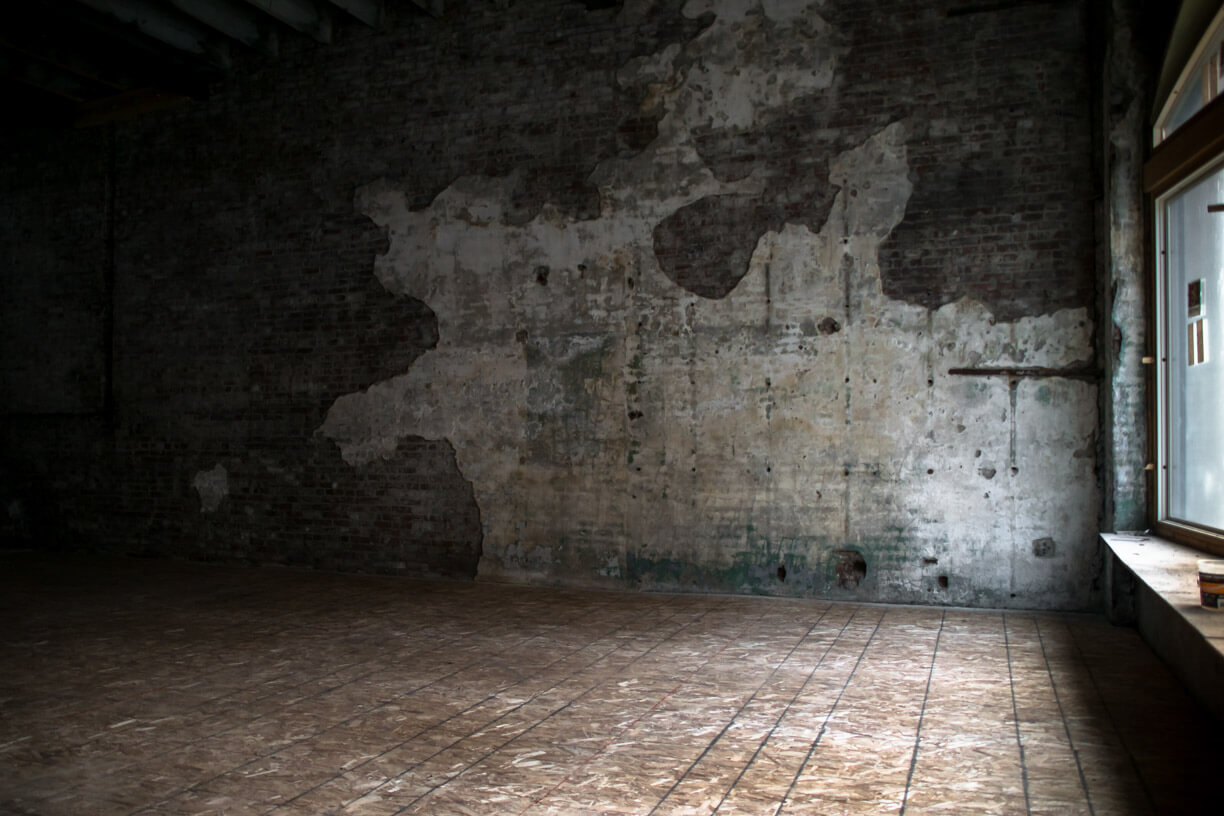 The second component book-ends the facade to the east, with masonry turning the corner and continuing down 8th Street. The rhythm of punched openings on the 8th street elevation relate to the secondary facade of the historic McNally building. Deep into the 8th Street block, the design becomes more assertive in its expression, punctuated by a six-story copper clad building that emphasizes the lateral connection and passageway through the site. The passageway is highlighted by an installation by light artist Erwin Redl. 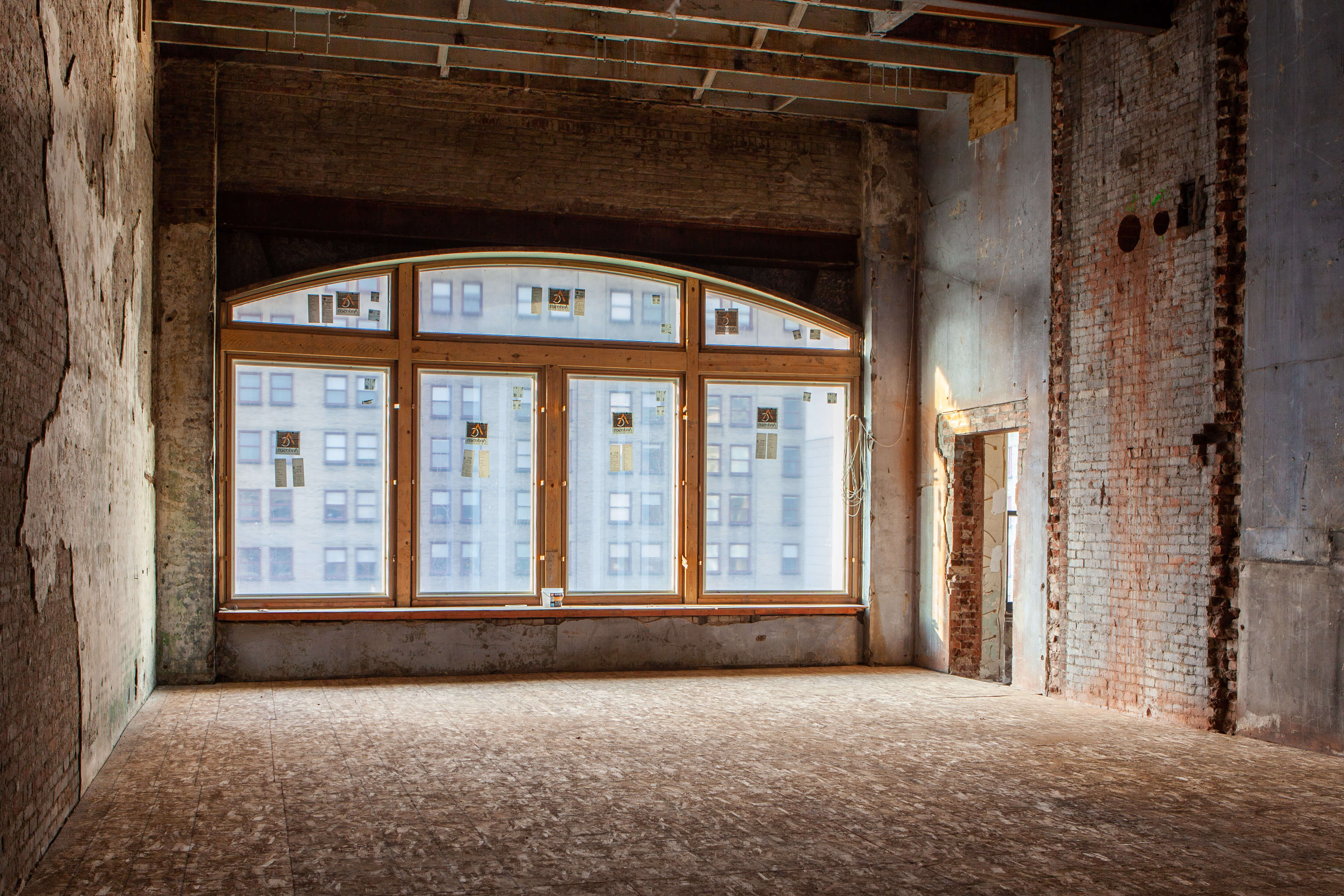 150 years ago, Eighth Street was known as Hancock Street, and the block of Penn Avenue between it and Maddock Way was home to Christ Methodist Church. Built in 1855, Christ Methodist occupied a small campus that included a women’s college. Christ Methodist was among the largest of many churches whose steeples rose above the rooftops of downtown Pittsburgh in the post-Civil War period. Downtown then still housed many residents who walked to work, stores, and religious services, but this was changing in the late 19th century as transit opened remote areas of the city to residential development and commerce began to take over the Golden Triangle.

In 1891, Christ Methodist Church and its college were engulfed by a fire that destroyed the entire block. The congregation decided not to rebuild downtown, but split into two and formed new churches in Allegheny City and Shadyside. The Methodists’ departure opened the Eighth & Penn block to commercial development at a time when two major engineering innovations—the steel building skeleton and the elevator—were making the construction of taller buildings possible. Between 1893 and 1897, three local entrepreneurs erected three new buildings on the Eighth & Penn block: the McNally, Bonn, and Heeren buildings.

James A. McNally purchased the lot at 711 Penn Avenue for $50,000 in 1893 and engaged H.E. Stoffler to construct the 9-story McNally Building in 1896. The architect is unknown, but its brick and limestone facade was designed in the Romanesque Revival style. Its foliate carved stone panels and capitals are reminiscent of the designs of the Chicago architect Louis Sullivan, who pioneered the architectural treatment of high-rise buildings.
‍
McNally was an Irish immigrant who first worked in the coal industry, then moved into linen imports. He later expanded to woolens and opened his first store a block away at Penn Avenue and Ninth Street. His sons, James P. and Charles McNally, joined him in the textile trade, and the business name was changed from House of McNally to James A. McNally and Sons. The brothers were able to keep the business afloat for a few years after the elder James McNally’s death in 1923, but McNally and Sons closed for good in 1926. The McNallys then leased the building to various other enterprises, including clothiers and engravers, but were unable to pay property taxes on it during the Great Depression. They lost their namesake building to Sheriff’s deed in 1940. A subsequent owner renovated the ground floor as a nightclub and the upper floors as offices.

Next door, Moses Bonn, a wholesale jeweler, purchased the lot at 713 Penn Avenue for $42,500 when it became available in 1893. Bonn paid an additional $7884.55 to enter into a party wall agreement with his neighbor on the other side, Otto Heeren, to use the load-bearing side wall of the Heeren Building that abutted Bonn’s property. Sharing Heeren’s side wall instead of putting up his own allowed Bonn to have a wider interior to his building, which was begun in 1893 and completed in 1894. In style, it has some Romanesque Revival features, such as its rock-faced granite piers, cornice and parapet. But it is really the Bonn Building’s windows which dominate its facade. Their three-part bay configuration allowed the maximum amount of light to penetrate the building’s deep interiors and showed that Pittsburgh was familiar with the innovations of the Chicago School of commercial building design in the late 19th century.
‍
Moses Bonn was born in Prussia and came to Pittsburgh as a young man in the late 1860s. He lived downtown on Second Street and worked for a jeweler on Wood Street before opening his own wholesale jewelry business at Fourth and Market Streets. His business prospered, and he moved it to Liberty Avenue in 1886. By 1893, he was doing well enough to build his own building. The Bonn Building was constructed by Doherty Brothers to the design of an unknown architect. Bonn occupied the first-floor storefront with his jewelry business and leased the open lofts above to small manufacturing and distributing firms specializing in clothing, trimmings, and floor coverings. Bonn’s son, Walter Bonn, took over his father’s jewelry wholesale trade in 1918 and closed it in 1945. By this time, the upper floors were largely vacant due to a decline in manufacturing in downtown Pittsburgh. Without income from rent, Walter Bonn could not afford the taxes on the property, and it was sold at Sheriff’s sale in 1948. From 1965 into the early 21st century, an office furniture company operated out of the first floor, while the upper floors remained vacant.

Otto Heeren, another wholesale jeweler, purchased the two easternmost lots at 715-717 Penn Avenue for his business, Heeren Brothers & Company, in 1893. Otto and his brother, William F. Heeren, founded the company in 1867, and it became renowned for its fine craftsmanship of products including medals, trophies, badges, tokens, watches, clocks, and optical supplies, as well as jewelry. By 1924, Heeren Brothers had become the largest jewelry vendor between New York and Chicago. But after both owners died in the late 1920’s, the 1929 stock market crash and the ensuing economic depression brought the company to a close. The Heeren Building was demolished in 1963 and the site was paved for surface parking.

‍
Photographs of the Heeren Building show a substantial Romanesque Revival stone edifice, six stories tall, of large, finely-tooled blocks with elaborate carved ornamentation. A clock tower rose an additional story above the corner of Eighth and Penn Avenues, its 18-foot-high clock an advertisement for the Heeren Company. When the building was demolished, a clock collectors’ association arranged for the Heeren clock to be salvaged and stored. Eventually, the clock was donated to the Pittsburgh History & Landmarks Foundation. Today it can be seen on display in the Pittsburgh Children’s Museum in the former Allegheny Post Office on the North Side.

‍
For the Eighth & Penn project, Pittsburgh architects PWWG designed contemporary facades that arec ontextual with the historic Bonn and McNally buildings in height, width, materials, and rhythm.Although the Heeren Building was long gone when this project began, excavation for new foundations revealed many architectural artifacts, including a stone block from the Heeren Building with a carved portrait of a man. Perhaps he is Otto or William Heeren.
‍